What sounds like the title of a poem is a very sad topic in the EIS. Or rather a non-topic. This survey was requested and made to show that Marine Harvest wouldn’t harm the region around the proposed huge salmon farm at Shot Head. But not only was the population of Trafrask (Adrigole) erased and the idyllic place called a ‘deserted village‘…

…a little river named Dromagowlane was completely omitted (click on right picture below). It is one of the rivers flowing into Bantry Bay and is considered as the cleanest of all of them. As well as being important to local anglers people in the small local tourism industry depend on it – as among their guests there are many anglers. 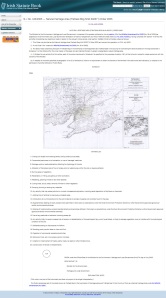 The Order recognises part of the lands known as Trafrask Bog in the townlands of Dromagowlane and Trafrask East in the County of Cork as a Natural Heritage Area under the Wildlife (Amendment) Act 2000.
3. Drainage works or water abstraction affecting the hydrology of the site.
10. Any activity that may cause pollution or nutrient increase/eutrophication, including aerial deposition of fertilizers or chemicals.
18. Stocking pools, ponds, lakes or rivers with fish.
signed by DICK ROCHE T.D., Minister for the Environment, Heritage and Local Government.

According to Dick Roche’s website his interests are: “Music, reading and swimming: Dick is a Life Governor of the Irish Water Safety.”

Dear Mister (Ex)Minister, how much is your signature still worth?

Heritage Area go together (just a few metres apart from each other)??? (Well done, just omit the river and the Heritage Area and they go well together…)

How many more incorrect facts, omissions and possibly even lies are to be found in the huge stack of paper called EIS? Was it hoped that the inhabitants of Trafrask, Faha, Dromagowlane, Curragh, Lackavane etc were innocent illiterates without internet? Or dumbheads without schools and education? Or even fools from a third world country who still believe in fairy tales? Or just a vulnerable population in times of recession who would welcome doubtful promises for a ‘bright future’ with one (or three or even six) new job(s) in the area?

2 thoughts on “The Forgotten River”