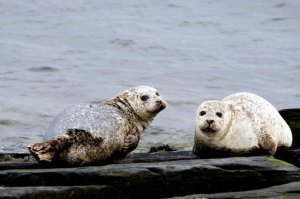 CONSUMERS are being urged to boycott Scotland’s salmon industry after it was linked to the killing of more than 300 seals inside 18 months.

Scottish government data released under freedom of information has named the locations of fish farms close to where 346 seals were killed, leading to claims that the industry is inhumane.

Seafood companies say the culls are a last resort to stop seals attacking underwater cages and snatching salmon. A single seal, they claim, is capable of eating thousands of fish in a matter of weeks.

They say this undermines an industry that produces 155,000 tonnes of farmed salmon each year, has annual exports worth £285m and supports 6,000 jobs.

However, conservationists and animal welfare groups insist culls are unnecessary and accuse companies of failing to invest in humane alternatives to deter seals, including anti-predator nets.