After yesterday’s debate on the danger of eating farmed salmon due to high level harmful pollutants, it was revealed Norwegian authorities have lobbied in EU to allow more toxin level in salmon. 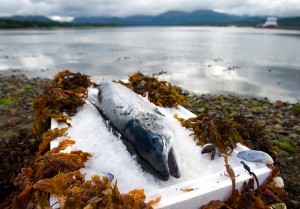 According to Aftenposten’s report, Norway has for years tried to get the EU to allow ten times more toxin (Endosulfan) in salmon than previously allowed. Now, Norway has received approval in the EU. In the consultation document from the FSA shows that there are economic reasons why Norway is eager to raise the limit.

“The limit value for the concentration of endosulfan in feed for salmonids is of great economic importance for the aquaculture industry in the short and longer term,” stated in the letter.

Endosulfan was previously forbidden to use in feed for all salmonids, but research has shown that fish can withstand poison through better feed than by being exposed to it in the water.

Opposition parties criticizes fisheries minister for not taking the debate seriously. Many fear all the debate about potential hazards of eating farmed salmon can have negative consequences for the Norwegian salmon export.