A definitive scientific paper, reviewing over 300 scientific publications, has just been published in the prestigious journal Aquaculture Environment Interactions on the effects of sea lice on sea trout stocks. A team of top international scientists from Norway, Scotland and Ireland reviewed all available published studies on the effects of sea lice and have concluded that sea lice have negatively impacted wild sea trout stocks in salmon farming areas in Ireland, Scotland and Norway. 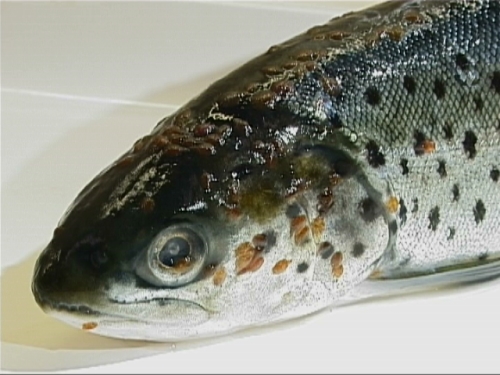 Sea lice infestation on sea trout, Photo Credit: Bengt Finstad, NINA
The paper entitled “Effects of salmon lice Lepeophtheirus salmonis on wild sea trout Salmo trutta—a literature review” (https://research-repository.st-andrews.ac.uk/handle/10023/7295) reached its conclusions based on comprehensive studies of the effects of salmon lice from over 300 scientific publications. The project was funded by the Norwegian Seafood Research Fund which provides investment in Norwegian seafood industry-based R&D with the objective of creating added value for the seafood industry.

The studies reviewed indicate that salmon farming increases the abundance of lice in marine habitats and that sea lice in intensively farmed areas have negatively impacted wild sea trout populations. The effects of sea lice on sea trout are increased marine mortality and reduced marine growth. This new study confirms the evidence collected since the early 1990’s in Ireland regarding the impact of sea lice on wild sea trout stocks, particularly in relation to the collapse of Connemara’s sea trout stocks.

IFI have consistently called for marine salmon farms to maintain sea lice levels close to zero prior to and during the wild sea trout and salmon smolt migration period in spring. IFI have also raised concerns regarding the location of salmon farms in the estuaries of salmon and sea trout rivers.

The Board of Inland Fisheries Ireland welcomed this important publication and commented: “This new scientific review paper confirms the need for very tight regulation of sea lice levels on salmon farms and raises legitimate concerns with regard to the potential impact of new large scale salmon farms proposed along Irelands west coast on salmon and sea trout stocks. Regulators will now need to consider the results of this comprehensive review when making decisions on the sustainability and approval of future marine salmon aquaculture licences and the regulation of sea lice at existing sites so as to ensure no negative impact on salmon and sea trout stocks.”

A new paper has just been published in the Journal Aquaculture Environment Interactions which outlines the negative effect of salmon lice on sea trout populations in intensively farmed areas of Norway, Scotland and Ireland. The project, funded by The Norwegian Seafood Research Fund, indicates that salmon farming increases the abundance of lice in marine habitats and that salmon lice in intensively farmed areas have negatively impacted wild sea trout populations. The effects of salmon lice on sea trout result in increased marine mortality and reduced marine growth.

The aim of this project was to summarize available knowledge on effects of salmon lice on sea trout to provide the aquaculture industry, wild fishery managers and researchers with a comprehensive and updated knowledge status. Knowledge gaps are also identified. The literature review was based primarily on international publications in peer-reviewed journals or books in order to establish a solid and justifiable knowledge base on the effects of salmon lice on sea trout. The authors of the report constitute an international group of scientists, from several institutions in Norway, Scotland and Ireland. A reference group was established to serve as advisors for the authors of the report and included individuals from NINA, the Norwegian University of Science and Technology, Bremnes Seashore AS and the Norwegian Seafood Federation.

The paper reviewed laboratory studies which show that salmon lice may induce osmoregulatory dysfunction, physiological stress responses, anaemia, reduced feeding and growth, increased susceptibility to secondary microbial infections, reduced disease resistance and increased mortality in individual sea trout. Osmoregulatory dysfunction is likely caused both by the mechanical damage of the skin and tissue and is an expression of overall physiological stress responses. Mechanical abrasion and impairment of the barrier between the fish body and seawater results in increased leakage of water from the host individual, and thereby affects its overall osmotic and ionic balance.   Salmon lice-induced fish mortality tends to be incurred within 10-20 days of exposure to juvenile lice (copepodids) in the laboratory, by which time the salmon lice have developed to the preadult and adult stages. Field studies have confirmed laboratory observations on the effects of sea lice.

Premature migratory return of salmon lice-infested sea trout to freshwater has been documented in Ireland, Scotland and Norway. Premature return is interpreted as an adaptive response by the host to salmon lice-induced osmoregulatory dysfunction in seawater. Return to freshwater may, in the short term, enable the fish to regain osmotic balance and survive. Return to freshwater also allows short-term recovery from salmon lice infestation, because salmon lice have a low freshwater tolerance. In the long term, however, growth opportunities and future fecundity of individuals may be greatly reduced by an abbreviated sea migration caused by salmon lice.

The study also examined the potential effect of sea lice on salmon. The overall effect is consistently clear; salmon lice have a potential significant and detrimental effect on marine survival of Atlantic salmon. Meta-analyses and long-term studies, and similar results from an increasing number of experimental studies in Ireland and Norway, show that these are levels of extra mortality (i.e., 12-29% fewer spawners) that can be expected for Atlantic salmon in farm-intensive areas. The study points out that the salmon louse-induced mortality from Atlantic salmon studies should likely best be regarded as minimum estimates for sea trout mortality as sea trout remain in near coastal waters and are therefore exposed to seasonally higher risks of salmon lice infestation.

Elevated marine mortality rates, such as that induced by salmon lice, result in a proportional reduction in the number of spawning adults. Because sea-run brown trout typically are females, any additional marine mortality has the potential to affect egg deposition and hence ultimately recruitment even more negatively than would be the case were there an equal sex ratio.

Conclusions
The studies reviewed indicate that salmon farming increases the abundance of lice in marine habitats and that salmon lice in intensively farmed areas have negatively impacted wild sea trout populations. The effects of salmon lice on sea trout are increased marine mortality and reduced marine growth. In summary, the combined knowledge from the reviewed studies provides evidence of a general negative effect of salmon lice on sea trout populations in intensively farmed areas of Ireland, Norway and Scotland. Premature migratory return, increased marine mortality and reduced growth of survivors that are induced by elevated salmon lice levels inevitably imply (1) a reduction in numbers and body size of sea trout returning to freshwater for spawning, and (2) a reduced or eliminated surplus that can be harvested by recreational and commercial fisheries.  In the extreme, reduced marine growth and increased mortality could result in the local loss of sea trout populations.